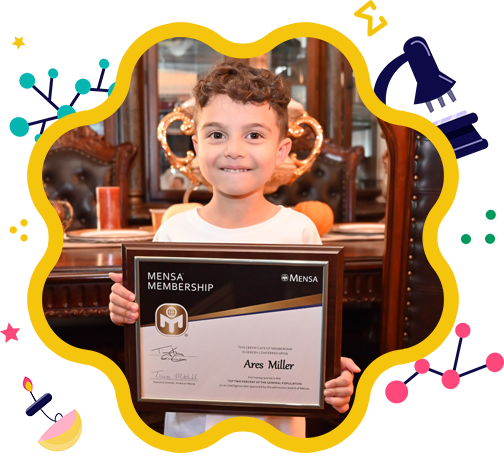 Ares Mason Miller, 4 year old resident genius from Staten Island, New York has earned his MENSA membership credential through scoring in the top 1% of IQ in the world. His self-study academic achievements exceed 5th grade levels in all academic areas, including math and reading. Ares is one of the youngest individuals to achieve this IQ level in history, and potentially the youngest person from New York (since there are no other published reports indicating otherwise).

He represents a new generation of children who far surpass the general population in learning capabilities. Ares displays the uncanny ability to listen, understand, learn, absorb, and memorize within the initial introduction and his endless learning energy promotes extensive knowledge within shorter periods of time. His fluid cognitive intelligence and non-verbal intelligence score in the top 99.9% and he continues to challenge himself on a daily basis due to an extreme love of learning complex concepts and ideas.

Based on his unique intellectual gifts, Ares self-taught himself how to read full sentences with comprehension at 2 years old along with a full understanding of complex geometric shapes (2D, 3D) and all color combinations. At 3 months old, Ares began repeating phrases and his first words were ‘good boy’ followed by spontaneous speech in the subsequent weeks and months.

Ares Mason Miller has mastered geography, with the ability to verbally name every state along with every capital, (also in alphabetical order) along with every single capital of every single country in the world on demand with perfect recall, which also includes naming the country through randomly seeing any country’s flag. He has memorized multiplication, division, addition, and subtraction with the capacity to conduct fast-paced mental math on demand. He also possesses a comprehensive understanding of the universe (planets and solar system), natural laws (scientific facts/biology/chemistry/physics), objects in nature (periodic table), animals, people (U.S. Presidents), and concepts from everyday life. His parents understand the uniqueness of his intellectual gifts and hope that he becomes a leader and role model for his generation.

Ares not only shines academically, but his behavior, disposition, and social communications are exceptional as well. He possesses a unique combination of exceptionally high cognitive capabilities paired with social and emotional intelligence where he effectively communicates with children his own age on the playground and holds serious conversations with educated adults.

Ares has a passion for learning and sharing his knowledge with others. He deeply loves his traditional family who provides a warm, caring, interactive, and engaging environment which allows his gifts to flourish. He spends his time enjoying life at home playing with a substantial toy collection acquired from his brother and sisters as well as the newest shiny object in the toy store. He gravitates towards and consumes a lot of educational television as well as everything YouTube Kids has to offer and other learning applications/games.

Mensa is the largest and oldest high IQ society in the world. To qualify for MENSA, an individual must score in the top 2% or above the 98th percentile from the general population on a standardized intelligence test. Mensa International is represented by 134,000 members, across 100 countries and in 54 national groups, including American Mensa, with more than 50,000 members; British Mensa, with over 21,000 members; and Mensa Germany, with more than 13,000 members. The global population as of 2021 is 7.9 Billion (7,900,000,000). Ares is essentially 1 of 135,000 out of 7.9 Billion.

Intelligent Quotient (IQ) is the measurement of cognitive ability or the capacity to learn, which is scientifically proven to be the #1 predictor of performance. Ares has been nurtured pre, during, and post birth by utilizing psychological awareness and scientific knowledge to promote an optimal environment for health and well being, including 5-Stage water filtration, organic milk, liquid multivitamin infant supplements, steak and vegetables, fruits and 100% juice, positive words (verbal and visual) to improve cellular health, and optimal behavioral practices that promote safety, communication, and mutual respect; and absolute zero tolerance for toxins such as smoking or alcohol as well as unhealthy foods (baby food, processed cakes, et al.). Emotional trauma was avoided at all costs during pregnancy and the gestation period was extended as long as possible for optimal brain development which happens in the later stages of development. Ares remained in his mother’s womb for 10 months which contributed to securing his cognitive gifts.

Ares Mason Miller invites you on his journey as he expands his knowledge towards contributing to the greater good and asks for your blessings and protection. No one person is an island and it takes a village to raise a child. May Ares inspire greatness in everyone, especially his peers, and promote realized potential in us all. From Ares and his family, we send our blessings and positive energy to you and your families. May love, kindness, humility, healing, and the path to actualization reach into your hearts and minds. May the spirit of faith, hope, and charity touch your lives and magnify your blessings beyond imagination and may your brightest dreams become reality.